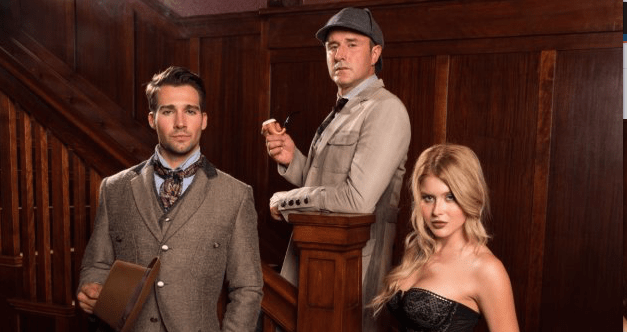 For an entire generation of audiences, David Arquette may best be remembered for his portrayal of deputy sheriff Dewey Riley, the earnest but bumbling small-town cop from Wes Craven’s Scream  franchise. But on Oct. 15 Arquette assumes the guise of another fictional crimefighter when he plays the lead in Sherlock Holmes at the Ricardo Montalbán Theatre. An original adaptation by Greg Kramer inspired by the original works of Sir Arthur Conan Doyle, the production garnered five Montréal English Theatre Awards when it debuted in Canada back in 2013.

While the eccentric super-sleuth may seem like an ideal fit for the quirky actor, Arquette initially focused on the differences between himself and the character. “He’s the smartest man in the room. I am not,” says Arquette during a brief break between rehearsals. “He’s incredibly specific and detailed, also not one of my strong suits. And he’s emotionless when it comes to the sufferings of victims, and I’m a softie.”

Of course, the similarities are there as well. “We both have excessive personalities partially driven by a strong ego and a love of mischief, which often leads us to experiencing the extreme sides of life,” Arquette says. “We see situations from a unique perspective and constantly question existence. We both enjoy a fine suit and the accoutrements of being a male peacock.”