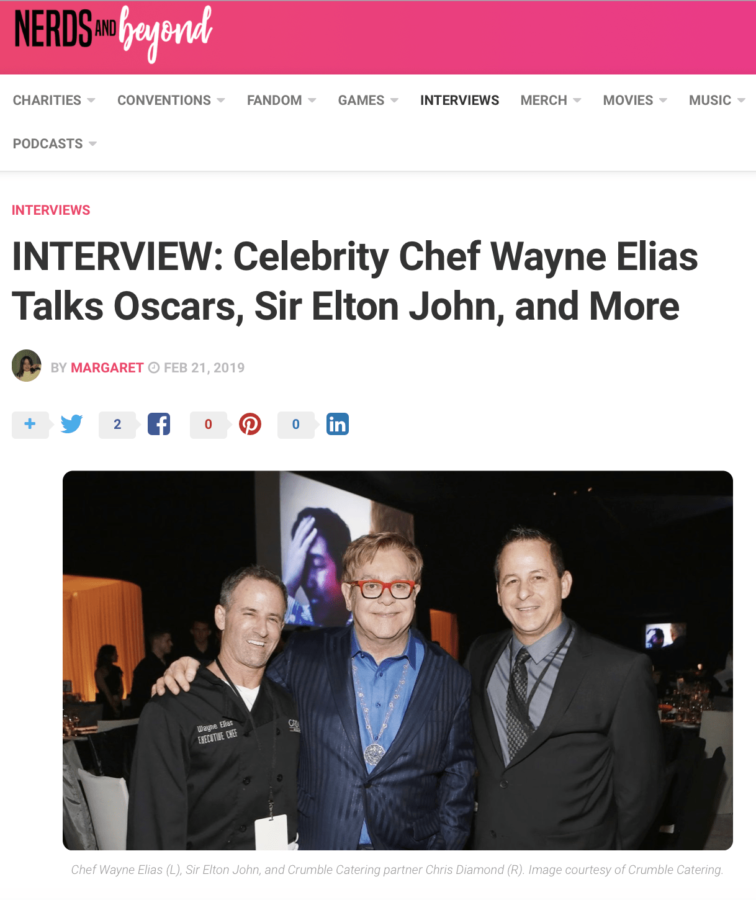 For the past 15 years, chef to the stars and founder of Crumble Catering Wayne Elias has been the go-to chef for numerous star-studded events and celebrations. Last year, Chef Wayne and his team of staffers catered the Venom Movie Premier , the Elton John AIDS Foundation (EJAF) Academy Awards Viewing Party, and the 2018 Kids’ Choice Awards.

And the chef’s schedule for this year is already in high gear. Just two weeks ago, Chef Wayne and Crumble Catering created a three course meal for hundreds of guests at the Steven Tyler Grammy Awards 2019 Viewing Party benefiting Janie’s Fund, an organization founded by the Aerosmith frontman that aims to help girls who are victims of abuse and neglect. The massive fundraising event garnered over $2.8 million dollars.

This Sunday on the 24th, Chef Wayne and his team will once again provide catering for the EJAF Oscars Viewing Party. This will be the 15th year that Chef Wayne and Crumble Catering have been tapped as the official caterers of the prestigious event. The talented team (150 servers and bartenders as well as 70 kitchen staff) will execute 1,000 meals in just three hours. Hollywood’s biggest A-listers will be served on site at West Hollywood Park while huge digital screens will display the live Oscars telecast.

Nerds and Beyond had the wonderful opportunity to talk to Chef Wayne about his passion, his inspirations, and what it’s like to work for the stars.

Chef Wayne Elias Talks to Los Angeles Blade: Oscar parties for under one million dollars
REAL HOUSEWIVES OF ATLANTA’ MEMBER IS MAKING HER MARK IN THE TECH INDUSTRY