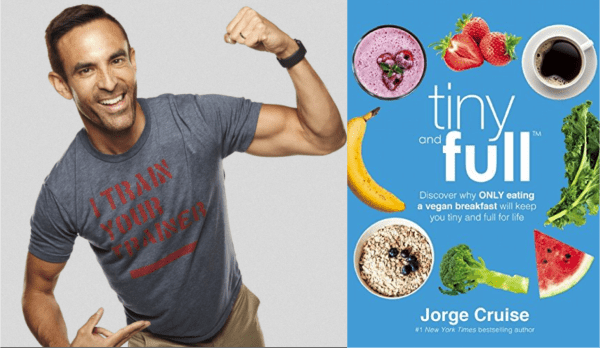 Celebrity fitness trainer and New York Times Bestselling author Jorge Cruise has sold over 6 million books to date. His newest book, Tiny and Full, which is set to be released December 28th has already taken Amazon.com’s sales charts by storm and is on its way to debut on No.1 upon its official release. In Tiny and Full, Cruise reexamines the popular vegan diet and lays out how just one vegan meal, i.e. breakfast, can provide the health benefits of a vegan diet without sacrificing other crucial nutrients.

His diet tips and tricks have also been tremendously popular in Hollywood’s celebrity circles. Celebrities who have followed Jorge’s diet plans in the past include Angelina Jolie, Jennifer Lopez, Lucy Liu, Eva Longoria, Chrissy Teigen, and Steve Harvey and he has long-term support from Oprah Winfrey, who had Jorge appear on her show multiple times as well in O, The Magazine and her O’s Guide to Life.

Congrats Jorge and to many more great healthy books!

Pre-order your own copy of Tiny and Full: Here