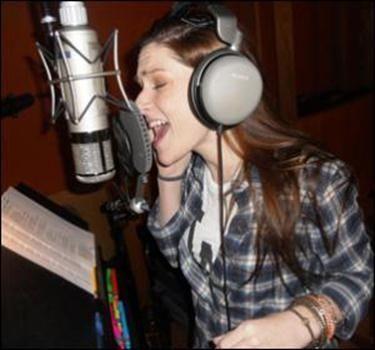 L.A. singer-songwriter Laura Michelle pictured last month at Multi-Grammy-winner Rafa Sardina’s L.A. studio lays down the final tracks for her hit single, “Chuck Norris,” a whimsical pop anthem about unleashing the Kung-Fu master that lies within us all; now available on iTunes. Co-written by Laura and writer-producer Jim McGorman, the song is the first off of Laura’s upcoming debut album, “Novel with No End.” releasing this Spring. The YouTube video skyrocketed past one million views in its first week. Co-directed by Kurt Zendzian and Max Moraga and filmed at iconic L.A. locales such as Hollywood Boulevard and the beaches of Santa Monica, the video is a witty commentary on the song’s central message of self-acceptance.

A proud prankster herself, Laura co-conceived the video’s concept, which features her at the roller rink, jogging along the shore and navigating Hollywood Boulevard dressed as Snow White.