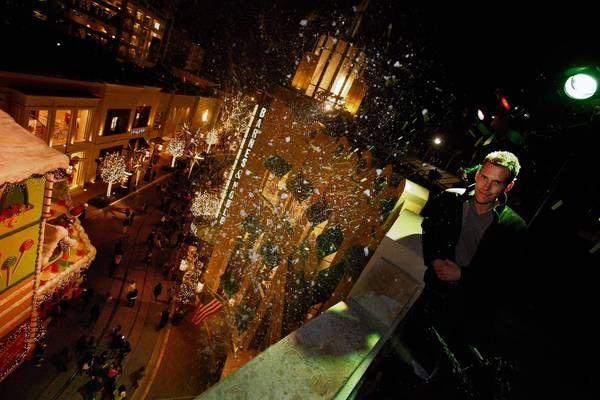 Creating the illusion of snow becomes big business for MagicSnow

On a recent Sunday morning in Los Angeles, Adam Williams and his crew set up their blowers outside a house in Hancock Park and blanketed the yard in 20 tons of snow.

Using 15-pound blocks of crushed ice, it took Williams and his crew about 2 1/2 hours to cover the front lawn and build half a dozen snowmen in a commercial for the cable channel FearNet. In the ad, a little girl cheerfully entombs someone who appears to be her father inside one of the snowmen.

To create the effect, producers of the commercial turned to MagicSnow Systems, a 10-year-old Los Angeles company. MagicSnow is best known for its twice daily snow show at the Grove shopping center that runs through  New Year’s Eve, but the rest of the time it specializes in manufacturing snow effects for commercial shoots, music videos, concerts and shows at malls, Hollywood premieres, and even cruise ships.