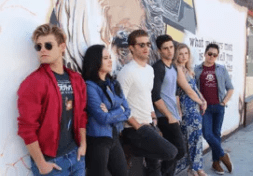 Post nuclear war – one foot outside turns your brain to zombie mush. What’s a teenager to do? Bunker down inside that damn cement library and wait for the world to reset. With a hilarious and insightful book written by Bradley Bredeweg and Kate Pazakis, inspired by the original and beloved classic film, you will both laugh and cry as you cheer for your favorite 80’s icons to make it out alive.

Bradley Bredeweg will direct a cast of up-and-coming theatrical stars, with a few beloved stage and screen actors to be announced in the next few weeks. So, stay tuned. Kate Pazakis is best known for creating the UMPO series at Rockwell, with shows that have included The Unauthorized Musicals parody of THE DEVIL WEARS PRADA, UMPO TROOP Beverly Hills, UMPO HOCUS POCUS, and the recent smash hit UMPO MEAN GURLZ.

Shows start May 18, and will run every Thursday, Friday, and Saturday nights.