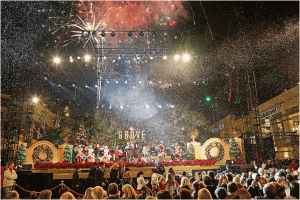 Every year it gets better, as L.A.’s Grove becomes the premiere destination for winter holiday fun. Brilliant pageantry warmed many a heart (an estimated 25,000) as the Grove launched the holiday season earlier this week. There was singing, dancing, philanthropy, fireworks, and Santa Claus looking rather darned happy to be welcomed by the gorgeous high-steppin’ Top Hats. Terrific acts ranging from Colbie Caillat and Far East Movement to Michael Bolton with Melanie Fiona and a lively performance by Backstreet Boys charmed the massive, multi-culti crowd. And above it all — literally — it was snowing.

Thanks to the showmanship of Adam Williams, the huge, enthusiastic throng at the Grove (who already caught a pleasing winter-esque chill as temperatures dipped way down into the 50s) got to enjoy a rarity in L.A., to say the least: magic snow — or, as Williams’ ever-expanding company is aptly called: MagicSnow. Backstage, I spoke with Williams about his 10th anniversary of creating improbable winter wonderlands — including making it snow at the Grove.