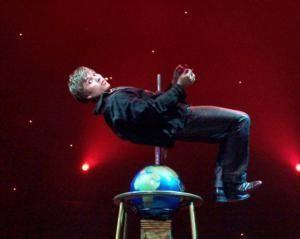 In a move designed to bring a taste of Las Vegas to East Tennessee, The Smoky Mountain Opry Theater in Pigeon Forge, Tennessee, has signed nationally known star magician Darren Romeo, “the Voice of Magic,” to a multi-year, multi-million production beginning March 7, 2015.

Romeo, a magician and a singer, will bring his critically acclaimed full-scale production “Magic Beyond Belief” to the stage. The new show features white tigers, large-scale original illusions, vocal performances, celebrity impersonations, comedy, and a huge tribute to the magicians who inspired him the most: mentors Siegfried and Roy and Harry Blackstone Jr.

In addition to worldwide touring, Romeo starred in his own show as “Siegfried & Roy presents, Darren Romeo” at the Mirage Resort Hotel and Casino. He has also performed in Las Vegas at Caesars Palace and the Flamingo Hilton and at the world famous Magic Castle in Hollywood to name but a few.