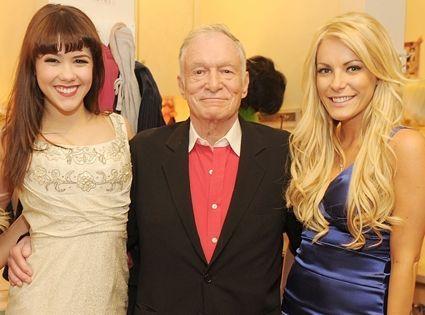 Bye, bye, Crystal Harris. Don’t let the Mansion door hit you on the way out.

Recently crowned Playboy Playmate of the Year Claire Sinclair says she had a feeling something like this might happen. “I’m not surprised in the least,” Sinclair, who dates Hef’s son Marston, just told me. “She seemed very unhappy. It was blatantly obvious to everyone that they didn’t have much in common. …Nobody really understood it. But Hef cared for her and she made him happy, so of course everyone was going to support him.”

She hopes the Playboy boss doesn’t try to reconcile. “He deserves better,” said Sinclair, who will be appearing on Howard Stern‘s radio show tomorrow morning. “It’s a selfish move to do it so suddenly. She should have been a little more adult about it and decided months ago. To put people through this five days before a wedding, I think it’s horrific.”