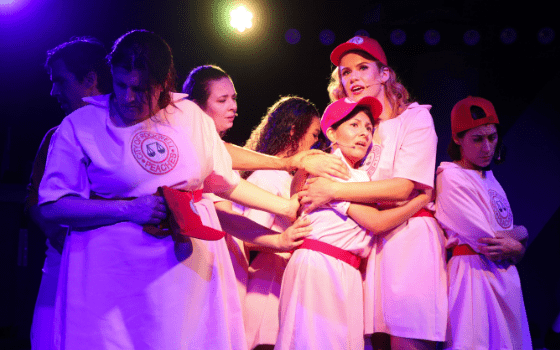 The soundtrack to 1992’s A League of Their Own may have included Madonna’s “This Used To Be My Playground,” but don’t expect a rendition of that track in the “Unauthorized Musical Parody” version of Penny Marshall’s all-star hit. (But do expect a hilariously overdone “cameo” by the recently passed director.)

Audiences can also expect another laugh-out-loud experience at LA’s Rockwell Table & Stage, which recently kicked off its next installment of the UMPO Series. The parody, like many of its predecessors, takes its inspiration directly from the movie: Two sisters, Kit (Amanda Kruger) and Dottie (Natalie Masini), join the first female professional baseball league and struggle to help it succeed amidst their own growing rivalry and the social impacts of World War II, a time when most young men were off fighting in the war. While remaining historically relevant, the performances and music in UMPO: A League of Their Own are given a modern, femme-pro twist. The production also features several impressive debuts on the Rockwell stage.

Q Magazine Cover and Feature on WILLAM
media-geeks.com - Unauthorized Musical Parody Series: A League of Their Own