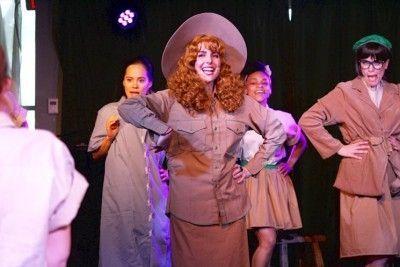 Continuing the tradition of turning cult classics into “unauthorized” musicals, Rockwell’s Troop Beverly Hills — written by Kate Pazakis and Ray Wetmore, and directed by Tye Blue and Gregory Nabours — makes musical numbers out of era-appropriate pop songs that cleverly propel the popular movie’s plot. We meet Phyllis Nefler (extremely talented Broadway actress Marla Mindelle) and company as they sing and dance along to Madonna’s “Material Girl,” and Phyllis and Freddy’s marital woes are examined to the tune of a Paula Abdul medley of “Cold Hearted” and “Straight Up.” Poor Chica Barnfell (Lindsay Pearce) sings a sapphic rendition of Heart’s “Alone” when her parents notoriously abandon her on her birthday for a trip to Monte Carlo.

The show riffs on the story’s goofier aspects, but ultimately it’s parody presented for an audience that has enough of an emotional attachment to the film to see a stage version over brunch or dinner.