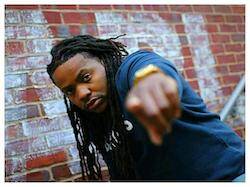 DURHAM – Clifton Gordon, better known as Felipe Luciano, has lost a lot of people in his life. Some have died. Some are in prison.

The rapper/songwriter keeps them alive through his music. For example, the album cover of “Legends Never Die” is plastered with pictures of people who were influential in his life, including his deceased father, grandmother, a close friend who was murdered, and his cousin, Montrell, 25, who was shot about a month after being released from prison. There are also numerous photos of friends who are incarcerated. “It’s a lot of people who ultimately lost their ability to live free or lost their lives. I wanted them to live on through me. It was to say to them, ‘we still love you and we remember you out here, and we’ll never let your name die,’ ” Gordon said.

Gordon, 30, grew up poor in Shelby. When he was 11, his family was uprooted from his North Carolina home and moved to Los Angeles, where he was thrust into a life of homelessness and gang violence. He eventually became a member of LA’s notorious Bloods.

In 2007, while visiting family in Shelby, Gordon, 18 at the time, hooked up with some old friends and got into trouble that landed him in prison for 5-1/2 years for assaulting a police officer with a deadly weapon and robbery with a dangerous weapon. Gordon left prison determined to turn his life around and to help others do the same.

Turning to music to escape the harsh realities of street life, he uses it to express and heal himself. His grandmother taught him how to play the piano when he was 8 years old, and he started writing poetry and music at 12. Gordon, who now lives in Miami and creates music as Luciano, has been a professional musician for four years.