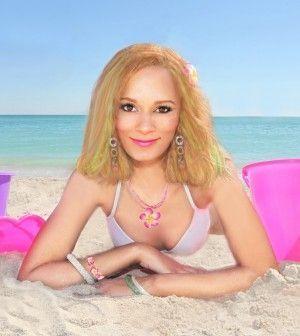 Hollywood, CA – L.A. singer-songwriter Treena Ruberg has her eyes on the skies and is set to launch her first studio album, titled AFTER SCHOOL, featuring hit songs such as “Materialistic” and “Why Do You Want More” for a-mid-summer album’s release. Following soon thereafter will be her first music video directed by Gil Greene.

Ruberg infuses levity and energy into her music — singing about fashion, the ups and downs of life, being taken “out of space,” and living life to the fullest. “If music makes you happy, follow your heart and make your dreams a reality,” she says.

And with that thought in mind Treena likes to keep it young and fresh with catchy sing-along anthems setting the summer off just right!

While her introverted writing process might not resemble the extroverted emotions of her performance, Ruberg intones: “the best way for me to come up with a great song is for me to be alone; quiet and peaceful with no distractions.”

As a young girl, Ruberg drew inspiration from many types of music; from church songs to pop-radio — Ruberg wrote lyrics to her own beat. She studied some of the greatest pop performers like Mariah Carey and Madonna. It was their finesse, talent and glam that captivated Ruberg’s heart and inspired her to do more with her secret talents and chase after the big stage. ”When it comes to your passion, you can’t go wrong by following your heart,” Ruberg exclaims.

“I approach writing with an open heart and mind. I hear the music in my head and the lyrics just naturally follow,” comments Ruberg. Adding, “after the writing process begins, I find a producer to create a song around my lyrics; a creative journey currently being guided by the extraordinary talents of Scott Storch on three of the album compositions.”

And now as she stands on the precipice of her record release, fans will have a chance to experience the musical journey that Treena Ruberg will be sharing with the world.