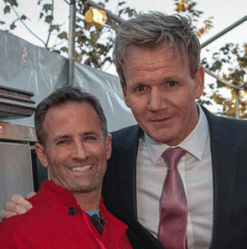 The care and feeding of celebrities reaches critical mass on Oscar night. Two veteran caterers of the glitziest shindigs on Hollywood’s biggest night revealed some of the ins and outs of the process and, of course, some of what their well-known guests can expect.

Over at the 22nd Elton John AIDS Foundation’s Academy Awards Viewing Party in West Hollywood Park, 1,000 donors will be treated to a more traditional, five-course waiter-served dinner while, yes, they watch the Oscar ceremony on big screens. The menu this year was designed by celebrity chef Gordon Ramsay. But while someone like that chooses the dishes each year, for a decade running now it’s been up to chef Wayne Elias and his Crumble Catering company to buy, cook and serve all that food.

“It’s my anniversary and nobody else’s,” Elias said, laughing.

On a more serious note, Elias, who also runs the Rockwell Table & Stage restaurant in Los Feliz, added that the event is “far from about me.”

The Ten Tenors Belt Out ‘New York, New York’ on The TODAY Show!
Gala of The Royal Horses Front Page Feature on HorseChannel.com!