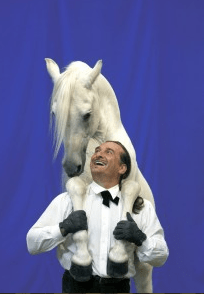 The first tour of the Gala of The Royal Horses in North America includes a stop in Peoria.

Riding master Rene Gasser will be in Peo- ria with his horses at 7 p.m. June 7 at the Peoria Civic Center. Gasser is the seventh generation in his family with experience with horses.

“When I was very young, my grand- mother bought me my first pony,” Gasser said. “From the moment I hugged him I fell in love with the idea of working with horses.”

He started training horses at a young age and showed his first horses 25 years ago in Europe and Australia. His favorite breed, he said are the old baroque breeds “because they have been bred for the movement that is shown in our performance.” However, he loves all breeds, he said. Eventually, Gasser started training to be- come a riding master.

Gasser then created and produced the Gala of The Royal Horses, which has been per- forming around the globe, including in Australia, New Zealand and Asia, but never in North America until this year.

Rene Gasser and his horses will present the Gala of The royal Horses June 7 in Peoria. The Gala recreates an event that is normally only able to be seen at riding schools in Vienna and Spain.

“Gala of The Royal Horses is a presenta- tion of all the royal breeds; it represents the culture of these horses,” Gasser said. “We are privileged to bring the horses and the show here in North America.”

During the show, horses show off various maneuvers they’ve been trained to do, including maneuvers once used on the battlefield that is now called “The Airs Above The Ground.”

Breeds seen in the Gala include the Andalusian, Friesian,Lipizzaner and Arabian horses. In addition, flamenco dancers ac- company some of the stallions during the performance to recreate a Spanish feel. Gasser said that he has heard nothing but great things in getting ready to perform in Peoria.

“A lot of people have mentioned how they regret missing the show because people they know have seen
it and how much they enjoyed it,” Gasser said. “So, make sure you don’t miss out.”