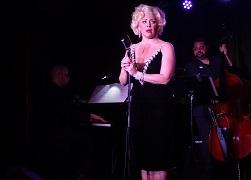 Marilyn Monroe is crossing the country to tell her rags-to-riches, obscurity-to-stardom life story in song, and since it’s triple-threat blonde bombshell Erin Sullivan doing the telling and the singing, With Love, Marilyn makes for a fabulously performed trip down memory lane.

Looking sultry and stunning in black velvet and diamonds, lots of diamonds, Sullivan’s Marilyn sings up a storm in hit after hit after hit, from “I Wanna Be Loved By You” (accompanied by memories of Norma Jean Baker’s marriage to first husband James Dougherty) to “Bye Bye Baby” (because that first marriage, like Marilyn’s two others, ended in divorce), and more, many more.

Imagining the final dress rehearsal of Monroe’s about-to-debut cabaret act, With Love, Marilyn has its star confronting stage fright with the help of pianist/music director Garrett Taylor while sprinkling in recollections of growing up Hollywood-adjacent (a trip to Grauman’s Chinese Theater had Norma Jean comparing her handprints with those of Jean Harlow), changing her name to Marilyn (in honor of 1920s Broadway star Marilyn Miller), and  signing a contract with Twentieth Century Fox (“My Heart Belongs To Daddy”) that soon made “Marilyn Monroe” synonymous with sex and glamour.

JOB SEARCH MASTER CLASS: 3 Things You Should Do Before You Apply for Your Dream Job
LEFAIR MAGAZINE: Review of the UMPO Clueless at Rockwell Table & Stage